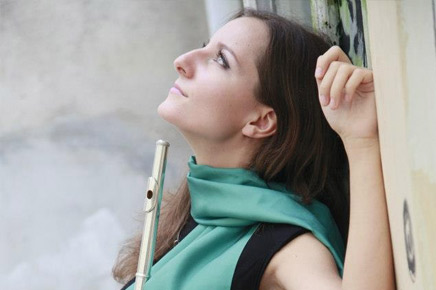 Ana Chifu, one of the most active and recognized performers and supporters to promote the classical and new-modern music in Romania, Greece and throughout Europe, Ana Chifu studied flute in Bucharest, in Dortmund, Germany and Paris, having won seven international and national awards and prizes. Her concert activity brought her in countries like France, Holland, Germany, Poland, India, Korea, Ireland, Italy, Finland, Bulgaria and Greece.

Ana has collaborated with the Athens Symphony Orchestra as principal flute. She has worked in the educational program of the Greek National Opera House“Opera Interactive in Primary Schools” throughout elementary schools in all the Greek territory. She has collaborated with the Greek Radio Symphony Orchestra, Καμεράτα Ορχήστρα των Φίλων της Μουσικής/ Armonia Atenea and the Bucharest Philharmonic Orchestra “George Enescu”. She was a member of the Metropolitan Chamber Orchestra of Bucharest and is a member of the contemporary music ensembles Profil-Sinfonietta, Propuls, devotion Moderna, Opus.art, InterArt and SonoMania. Ana is a founding member of the Syncretic group of contemporary arts seduCant, creating and taking part in interactive multimedia shows both as a musician (flute, percussion) and as a dancer.

Recently, Ana invited to ARFA (Romanian Association of women in Art) and is now an active member.

Future performances include recitals and chamber music concerts in Switzerland and Austria, as well as solo performances with orchestra in India.