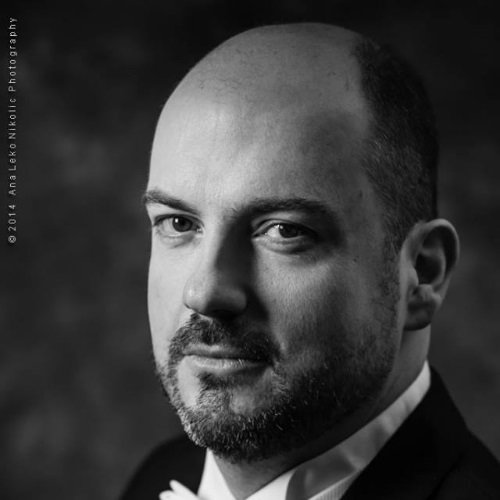 Born in Athens in 1972. Graduate of the Attica Music School (Class of Dionysis Malouchos) with honours. Graduate of the Theatre School of the University of Athens. Won a scholarship from the Academy of Athens to study Orchestral Conducting and Opera at the Musical Academy of Wurzburg with Dr. Hermann Dechant and Peter Falk. Graduated having obtained the Konzertdiplom. He has participated in international seminars of orchestra conducting and took private lessons with Carlo Maria Giulini. He worked in the Wurzburg Opera Theatre as a musical trainer and orchestra conductor. He has also worked for the well known children’s choir Wiener Sangerknaben as pianist and director. His has a wide experience in conducting orchestras and choirs and has had numerous collaborators all over Europe. He has also performed in many important theatres in China, Korea and Macau. He has gone on tour with over seventy musical organizations including the most renowned youth orchestras of America. In 2005 he founded the Ensemble Retro Wien. He teaches and conducts in seven languages and he has translated theatrical plays and theoretical musical works into Greek. He is currently preparing his doctoral thesis on the musical theatre of the avant-garde Greek composer Anestis Logothetis.