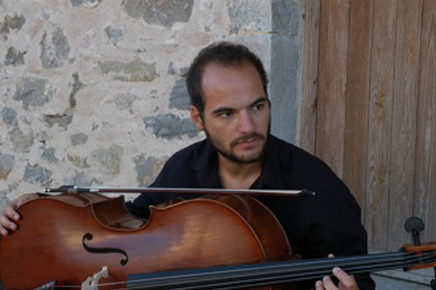 Antonis Pratsinakis was born in Thessaloniki, Greece, in 1983. He studied in Thessaloniki with R.Dragnev and later on completed his Bachelor and Master studies in Amsterdam with D.Ferschtman and J.d. Herder, with scholarships by the Greek State Scholarships Foundation and Scholingsfonds.

He attended master classes with V.Despalj, N.Schakhovskaya, T.Tsutsumi, A.Bylsma. He also attended the Waltermaas Huis workshop “de performer 08/09”, the Ligeti Academy from the Asko|Schoenberg and he participated in 2009, 2010, 2011 in Master Classes of the Ensemble Modern in the Paxos Spring Festival.

He performed at chamber music festivals and as soloist in Greece, Germany, Austria, Bulgaria, Holland, Belgium, Italy, Turkey and Serbia where he received excellent reviews for his playing. He recorded for the National Radio of Bulgaria and performed for the Greek Radio-Television and Concertzender. He has published his first book “60 variations on a Barucaba theme”.

He is a member of the Infinity Piano Trio, the CsEaLLOx Duo, Ergon Ensemble and Kameroperahuis.
He collaborated with the Veenfabriek, the Atlas Ensemble, Sonnevanck and Toneelgroep Amsterdam.