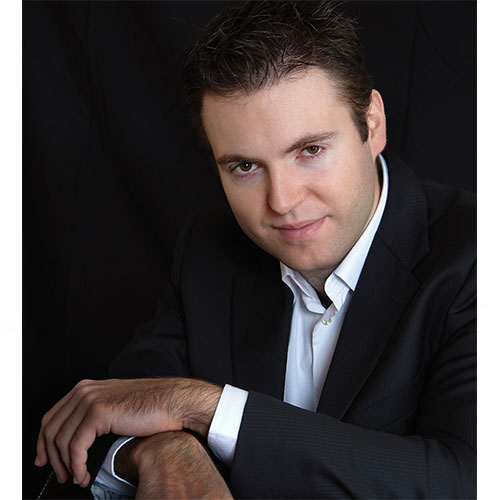 Apostolos Palios has been described as “a marvelous pianist” (Cyprien Katsaris), “an extremely gifted, communicative and dedicated musician of great finesse, artistry and charismatic projection, who possesses excellent international potential” (Yonty Solomon).Born in Carditsa/Greece, Palios graduated with master- and soloist diploma with distinction from the Berlin Music Academy Hanns Eisler with Prof. Georg Sava and the Leipzig Music Academy Felix Mendelssohn Bartholdy with Prof. Markus Tomas. He also studied musicology at the University of Athens, where he received his Ph.D. and received lessons from distinguished artists Ciccolini, Perahia, Katsaris, Solomon, Szidon and Hadjinikos. He has won several scholarships (Costopoulos Foundation, World in Harmony Foundation) and he is prizewinner of several National and International Piano, Chamber Music and Composition Competitions in Greece, Germany, Spain and Italy. He has received a special award from the Academy of Athens and has won the prestigious prizes “Best Greek Young Artist of the Year 2007″ and”Best Recording by Greek Artist” from the Association of Greek Critics for Drama and Music. He has performed at the most important concert halls in the world, like Berlin Philharmonic Hall, Vienna Konzerthaus, New York Carnegie Hall. He is a frequent guest at many International Festivals in United Kingdom, France, Spain, Germany, Austria, Turkey, Cyprus, Russia, Norway, Romania and Greece and has been presented on television and music magazines. As a soloist he has appeared with all Greek orchestras and abroad (Berlin Symphony Orchestra, Orquesta Ciudad de Granada). He has also recorded for Naxos Label and has given the first world performances of piano works. He has been a member of the well-known Aurora (Piano) Quartet of Germany, as well as piano lecturer at the Music Science and Art Department of the Macedonia University in Thessaloniki, lecturer at the Music Studies Department of the Athens National University and artistic director of Young Classical Series.