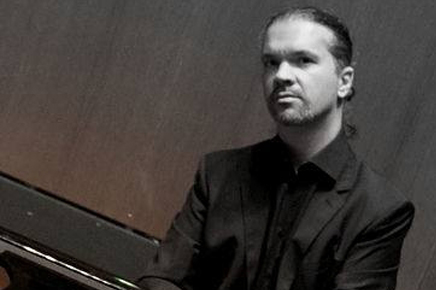 Christos Sakellaridis was born in Athens, Greece. After completing his studies in Greece, he enrolled the “F. Liszt” Academy in Budapest, with professors A. Kemenes, and I. Lantos, graduating with honors with an artist’s and teacher’s Diploma.

During his studies, he had a scholarship from the “A. Onassis” Foundation. He also attended masterclasses by renowned pianists, such as L. Vlassenko, K. Katsaris, L. Berman and K. Kommerling in Salzburg as well with R. Jansen for lieder accompaniment.

Christos has been performing with his wife, B. Pincetic, as a piano duo, in prestigious halls across Europe.
In 2003, he won first prize at the H.E.L.E.X.P.O. chamber music competition and in 2007 he was a laureate with Pincetic-Sakellaridis piano duo in the ”E. Grieg” competition for two pianos, in Oslo.

A keen performer of contemporary music, he is a member of the ”Ergon” Ensemble for Contemporary Music, cooperating with the ”Ensemble Modern” in Frankfurt.

An accomplished accompanist, he was a chamber music coach at the Music Department of the Ionian University and for four years, repetiteur of the Ballet Company at the Greek National Opera.

In addition to performing and teaching, Christos is very interested in new technologies used for performance and composition. He writes music for other media, especially for contemporary dance and video art.