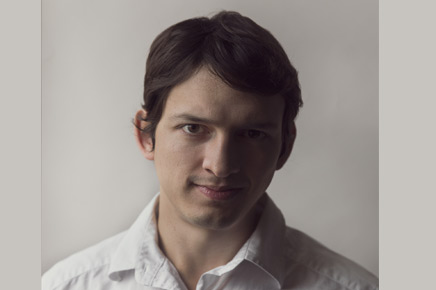 Daniel Tamayo Gómez was born in Medellin, Colombia in September 1989 and started his formal studies in music at EAFIT University located in the same city in 2007. After graduating from his bachelor degree in Jazz guitar, Daniel was awarded an honorable mention and a Full Scholarship for graduate studies by the University, and completed a Master degree in Music Composition at the same University.

Daniel attended to the Montreal Jazz Festival in 2011 and 2014, where he had master classes and played in some of the city’s venues. In 2015 Daniel was awarded a Scholarship by the DAAD, for postgraduate studies in music composition in Germany. He traveled to Köln in august 2015, where he started studying a Master degree in composition at the Hochschule für Musik und Tanz. He has studied composition and arrangement with Florian Ross, Frank Reinshagen, Hendrik Soll, Joachim Ulrich and Siegfrid Koef at the Musikhochschule Köln, as well as additional studies in composition and arrangement with Jan Torkewitz.

In October 2015, Daniel was selected as a Finalist and won the Jury Price for the II international Jazz composition contest – 10 Silesian Jazz Festival in Katowice, Poland. Daniel participated successfully in the Bujazzo (Das Jugendjazzorchester der Bundesrepublik Deutschland) international composition competition 2016, and as a result his piece was included in the current program of the Big Band that was played and recorded on the 4th of March 2016 in Trossigen.

Throughout his time in Germany Daniel has been active as a guitar player and as composer in Köln and in some other European cities like Düsseldorf, Hamburg, Vienna, Barcelona and Katowice, playing his own music with his band, and also playing with other projects like the Hochschule für Musik Köln Big Band, Mangold quartet, among others.