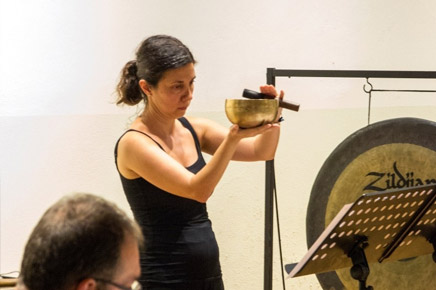 Dimitra Trypani studied Composition at the University of Edinburgh with Nigel Osborne (PhD and MMus with Distinction) and Greek Literature at the Aristotle University of Thessaloniki, Greece.

In her artistic “luggage” she carries many collaborations with well-known orchestras, ensembles and soloists (the Camerata String Orchestra, the Orchestra of Colors, Athens String Quartet, Piandaemonium Ensemble, and singer Savina Yannatou, among others).

As well as composing and teaching, she has been leading workshops on music creation, composition and interdisciplinary performance practices.
Apart from Music and the Arts, her interests include the fields of Physics, Neuroscience, Cosmology and Religion.
She is currently based in Corfu, where she works as a Lecturer in Music Theory and Composition with Interdisciplinary Practices, at the Department of Music Studies of Ionian University.
Her compositional projects in 2017 include the music for a full feature animation filma new 60 min. music performance premiering in April at the Athens Megaron, and a 60 min. upcoming work commissioned by the Friends of Paxos Αssociation in collaboration with Austrian musicians.