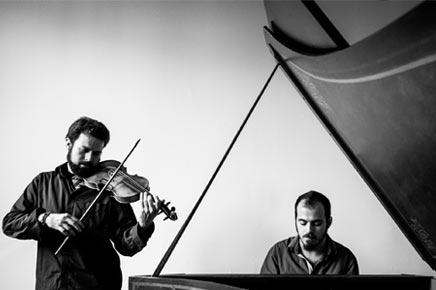 DissensoDuo is a baroque music duet consisted by George Samoylis (baroque violin) and Alexis Mastichiadis (harpsichord and organ). The two musicians met in 2013 during their studies at the Utrecht Conservatory in the Netherlands.

Using music of early 17th century as their starting point, DissensoDuo handle the wide specter of violin and keyboard instruments repertoire from the beginning of 1600 to the end of the 18th century. Considering improvisation as an important element of a historically documented performance, DissensoDuo always find a way to enter it in their concerts. They have performed in various concert halls in the Netherlands and Greece. They have participated for two consecutive years in the internationally acclaimed Utrecht Festival of Old Music. In October 2016 they organized seminars and workshops on the interpretation of Italian early baroque at the Music Department of the Ionian University.

“Friends of Paxos” Non Profit Association was among the Organizations that supported those Seminars.

Originating from the island of Corfu, George Samoylis, born in Athens in 1986, started violin lessons at the age of 7 at the Athens Music Society Conservatory under the guidance of Mirela Papa. He continued his music studies at the State Conservatory of Thessaloniki and at the Contemporary Conservatory next to Dimitris Chandrakis and Miky Michaelidis. He graduated with honors in 2006 also receiving a special prize for excellence in performance. He then continued his studies in Vienna until 2009 next to Regina Brandstaetter and Sylvia Viertel. After studying baroque violin with Simo Papana, he continued his studies specializing in baroque violin and viola at the Utrecht Music Academy next to Antoinette Lohmann from where he graduated in 2014 and received his Masters degree in 2016. George Samoylis has collaborated with well known orchestras and chamber music ensembles in the Netherlands like Holland Baroque Society, Furus musicus, La Sfera Armoniosa, Opera Amsterdam. He has also performed as a soloist in many concerts in Greece, Austria, Germany, Holland, France and Italy.

Alex Mastichiadis was born in 1990 in Adelaide, Australia. He started piano lessons at the age of 7 in Athens. He soon became interested in baroque music and decided that the harpsichord offered him the potential to express himself more directly than the piano. In 2008 he started studying the harpsichord at the Music Department of the Ionian University next to Katerina Mihopoulou. After his graduation in 2014, he continued his studies as a postgraduate student at the Utrecht Music Academy with Siebe Henstra as his harpsichord professor and Reitze Smits as his ecclesiastical organ professor. He has performed all over Holland and has actively participated in seminars with Caesilia- Consert, Wilbert Hazelzet, Heiko Ter Schegget, Antoinette Lohmann, Nicovan der Meel, Alessandro Ciccolini and Bob van Asperen. During his studies he worked as an organist at the Zeist Church. Besides his love for old music, he also enjoys participating in concerts on the Amsterdam Stage for Free Improvisation and he regularly performs in concerts in Utrecht and Amsterdam.