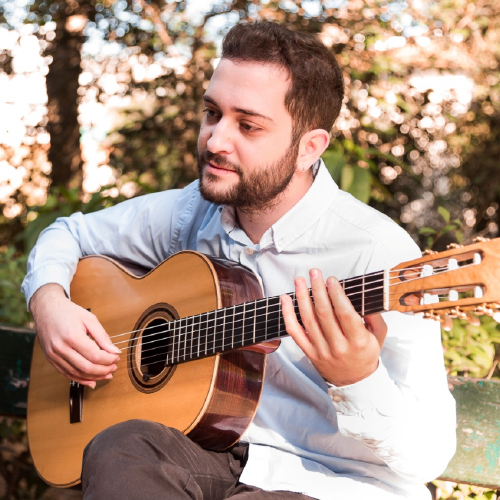 Konstantinos Avlonitis (Corfu, 1993) started guitar lessons at the age of 7 at the National Conservatory of Corfu. He graduated from the Music High School of Corfu while taking guitar lessons with various guitar professors. He became member of the school choir and mandolin orchestra. While being a university student in Athens he continued his guitar studies next to Professor Michalis Kodaxakis at the Contemporary Conservatory of Athens from where he graduated in 2018 top of his class. He participated in various guitar competitions and won first prize at the 1st Paros International Guitar Competition. He has performed in festivals in Greece and in Europe. He has participated in seminars of internationally distinguished guitar soloists, among which were Hubert Käppel, Dejan Ivanovic, Leo Brouwer, Łukasz Kuropaczewski, Duo Melis, Gabriel Bianco. Since September 2018 he is studying next to guitarist Carlo Marchione in Maastricht.