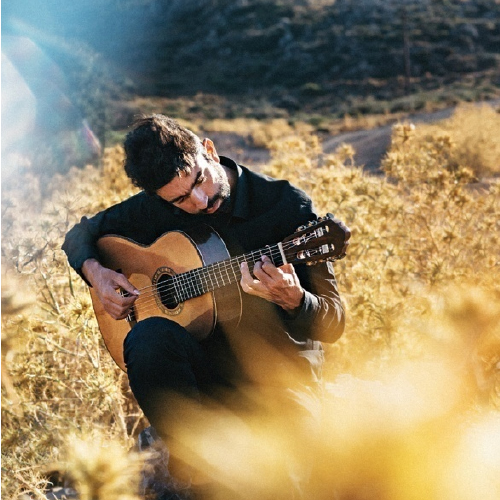 Michalis Kodaxakis is a professional guitarist for more than 20 years. He graduated from the Municipal Conservatory of Piraeus and then studied at “Robert Schumann” University, Düsseldorf next to professor, Joaquín Clerch. He won first prize at the “Francisco Tárrega international competition, after which he performed all over Greece and Europe. He has cooperated as a soloist with many orchestras among which the Athens State Orchestra, Orchestra AUKSO (Poland), Arad Philharmonic Orchestra (Rumania), Filarmonia das Beiras Orchestra (Portugal), Orquesta Sinfonica de Vallés and Collegium Instrumental de Valencia (Spain) and Bucharest Radio Orchestra.
He has premiered many works written for guitar, many of which were dedicated to him personally like the work “Estudio deligados” by Joaquín Clerch, “Dance Νο 2” and “Swirl” (Strovilos) by Efi Markoulaki, “Hadjidakis Suite” by Leonidas Kanaris, “States of mind” by Dinos Konstantinidis and the work “Nocturne for Michalis” by Michalis Andronikos.
He recorded for NAXOS in 2006 with works by M.M.Ponce, F.Martin, E.Krenek, F.Tárrega, A.Khachaturian, and the work by J. Clerch “Preludios de Primavera” in a premier recording. In 2008 he recorded the work “Summer Night’s Dream” by Periklis Koukos based on the famous ballet – opera.
He has been touring all around the world since 2004 with guitarist Dejan Ivanovich interpreting works for two guitars. The guitar duet recorded works by J.S.Bach, M.Castelnuovo-Tedesco, J.Rodrigo and F. Sor under the title ““Les Deux Amis” for the German Record Company KSGEXAUDIO.
He is a regular member of the renown music group ENCARDIA. He teaches in various festivals, Universities and Conservatories in Greece and abroad.
http://www.mkontaxakis.com/
https://www.encardia.gr/