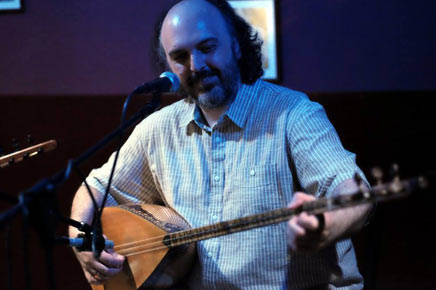 Periklis Papapetropoulos (Περικλής Παπαπετρόπουλος) was born in Athens but grew up on the island of Crete. His first musical experiences were with Cretan traditional music and at the age of 16 he participated in village festivals as part of the group of Psarantonis playing laouto and bulgari.
In 1985 he met Ross Daly and studied saz and tanbur with him for several years before becoming a regular member of his ongoing musical workshop “Labyrinth”. As a member of “Labyrinth” he participated in concerts, recordings and television productions in Greece and abroad.

He is also a very experienced and renowned teacher of saz and lavta having taught at the Experimental Musical Gymnasium-Lyceum of Pallini, the society for the dissemination of National Music, and the Musical Workshop “Labyrinth”. He has many accomplished students who are today amongst the finest instrumentalists in Greece. He has recorded 2 solo CDs as well as his most recent project “Saz Grubu”, an orchestra of saz players who play music from Turkey, Greece, and Bulgaria.

He now plays with various groups and musicians in concerts and recordings in Greece and abroad. He is a regular member of Ross Daly’s group “Labyrinth” and also regularly performs concerts with his own ensemble “Saz Grubu”.