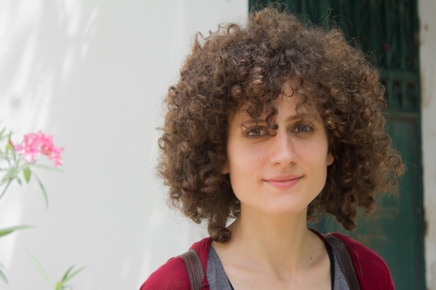 Rrezarta Kruja started her music studies at the age of 10 with violin and piano lessons in Athens. She is an undergraduate student at the Music Department of Corfu, where she has studied instrumental composition and orchestration with Dimitra Tripani and Iosif Papadatos and electroacoustic composition with Andreas Mniestris and Theodor Lotis.

During her studies, she has composed both instrumental and electroacoustic works. She has also been active as a violinist and performer in many concerts and performances, with most recent the piece of Volkmar Klien “Variations in Air Pressure”(2017) for violin and electronics at Megaron Athens Concert Hall, the durational performance “Quicklime” at Benaki Museum (2016) and the music performance “Didimanes”(2016) at Ionian Academy, Corfu.

She has been a member of her university’s Contemporary Music Ensemble since its foundation in 2011 and a member of the Symphonic Orchestra of F.E.K. Since 2013, she has been a member of the music collective ΚΕ. ΔΙ. ΜΟΥ. ΡΑ, which investigates new ideas in music though improvisation, game and electronic processing and performs regularly in Corfu in various instrumental combinations. Amongst their activity is the performance of the game piece “Cobra” by John Zorn at Athens Biennale and Baumstrasse (2013).

Rrezarta has participated in two CD releases [upcoming: the work “Didimanes” of Dimitra Tripani and “Usurum” by usurum (2013)] and has written the music for short animation film “Butler’s choice” of P. Paradisis, which participated in many festivals and was awarded at Balkan Film and Food Festival (2015).

She has attended many composition seminars with composers such as Theodor Antoniou, Marco Stroppa, Jonathan Cole and Annette Vande Gorne. Apart from music performance and teaching, she is very interested in film industry, Asian philosophy and Japanese culture. Rrezarta is currently finishing her studies in violin and composition.