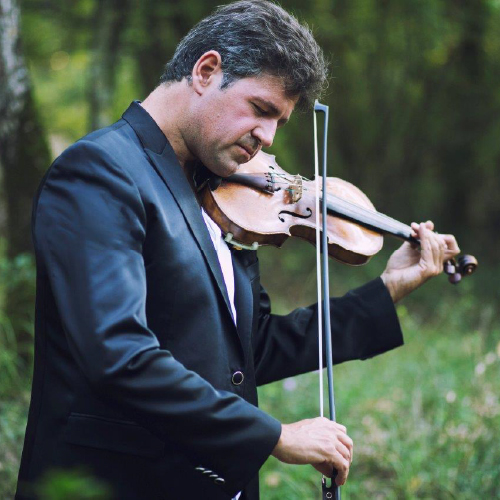 Simos Papanas was born in Thessaloniki, Greece in 1979. He has studied violin, baroque violin, composition and mathematics at the New Conservatory of Thessaloniki, Oberlin College and Yale University. He studied violin with Petar Arnaoudov, Taras Gabora and Erick Friedman, baroque violin with Marilyn McDonald and composition with Christos Samaras.

He has played as a soloist with orchestras such as the Staatskaplle Dresden, the Bolshoi Theater Orchestra, the Zurich Chamber Orchestra, the Kammerorchester Basel, the Geneva Camerata, the Prague Symphony Orchestra, the Athens and Thessaloniki State Orchestras, the National Symphony Orchestra of the Greek Radio, the Sofia Philharmonic, the Sofia Soloists, the Cyprus Symphony, the Munich Symphony Orchestra, the Southwest German Symphony Orchestra, the American Bach Soloists and the Philharmonia Moments Musicaux (Taiwan). Papanas has recorded as a soloist for Deutsche Grammophon, BIS and Centaur. He has performed in festivals such as Verbier (Switzerland), Schlesswig-Holstein (Germany), Savannah Music Festival (U.S.A.), Sommets Musicaux Gstaad (Switzerland), the international violin festival of St. Petersburg, the Athens Festival and the Tokyo Music Festival, and at venues such as Carnegie Hall, Palau de la Musica (Barcelona), St. Petersburg Philharmonic Grand Hall, Semperoper Dresden and Athens Herod Atticus Theater. His compositions have been performed and recorded around the world (U.S.A., Russia, Canada, Peru, Iran, Japan, Taiwan and most European countries), in prestigious concert halls such as the Musikverein in Vienna, the Tonhalle in Zurich and the National Concert Hall of Taipei. Since 2003 he has been concertmaster of the Thessaloniki State Symphony Orchestra.