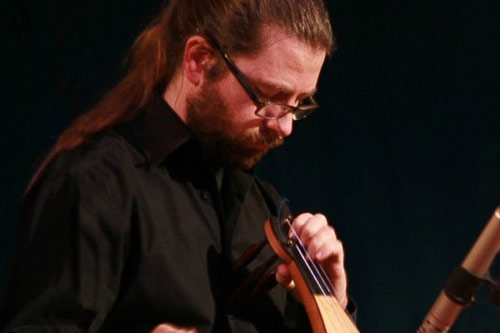 Stratis Psaradelis was born in Athens in 1978. He started studying music at the age of 7, beginning to learn classical guitar and byzantine music. He fell in love with the traditional music instruments of Greece and the Orient during his high school studies at the Pallini Music School, Athens.

He started playing the saz next to Periklis Papapetropoulos while, at the same time he began seriously concentrating in learning Istanbul lyra and lute.

He participated in a series of saz seminars at the “Labyrinth” Music Workshop next to Talip Ozkan and Mehmet Erenler. Self taught in Istanbul Lyra, he managed to enrich his performing skills studying next to Sokratis Sinopoulos and Derya Tourkan.

He has graduated with honors from the Music Department of the National Kapodistrian Athens University. Since 1999 he teaches at the Music High School of Pallyni, Athens.