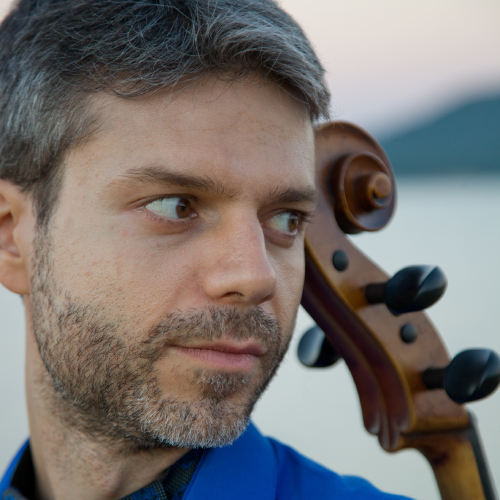 Vassilis Saitis has been holding the position of principal cellist of the Thessaloniki State Symphony Orchestra since 2002.

His performing activity includes regular engagements, as a soloist, with the main Greek orchestras and chamber music concerts in Greece, England, France, Turkey and The Netherlands.

He is a member of dissonArt ensemble, a chamber music group specializing in contemporary music. The ensemble has performed extensively in Europe (Greece, Cyprus, Austria, Italy, Denmark, Switzerland, Spain and Germany).

Every summer, since 2014, Vassilis has been teaching at the Pelion Festival, where he also takes part in concerts focusing on the cello, performing with the Cello Quartet, the Cello Ensemble and other chamber music groups. In 2014 and 2015 he gave masterclasses at the State Conservatory of Thessaloniki.

He was a member of the European Union Youth Orchestra for five years (1995-1999). In the summer of 1999 he was appointed principal cellist of the EUYO and performed throughout Europe under Sir Colin Davis and Bernard Haitink in venues such as the Cite de la Musique in Paris, the Concertgebouw in Amsterdam and the Royal Albert Hall in London, the last concert being broadcasted live on BBC television.

He studied the cello with David Strange and Colin Carr at the Royal Academy of Music in London graduating with the degrees Bachelor of Music (2000) and Master of Music (2003) receiving a scholarship, for his Master studies, from the Friends of Music Society of Athens. During the 2000-2001 academic year he took part in the London Symphony Orchestra “String Experience Scheme”, rehearsing and performing with the LSO.