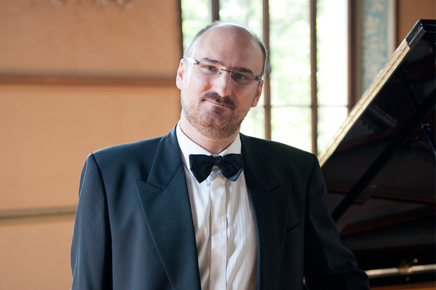 Edoardo Bruni is a pianist and composer. He graduated in piano with full marks at the Conservatories of Trento and Rotterdam, subsequently perfecting his technique in masterclasses with Delle Vigne, Cohen, Berman, Schiff and Margarius.

He has given concerts in Italy and Europe, both as a soloist and in various ensembles (playing with the pianist Monique Ciola, the harmonicist Santo Albertini, the flutist Jessica Dalsant, the violinists Ivo Crepaldi and Patrizia Bettotti, the soprano Letizia Grassi and the “Garnerama” jazz ensemble); some of his performances have been part of festivals where artists such as Yo Yo Ma, Bruno Canino, Ivo Pogorelich, Stefano Bollani, Michele Campanella, Rahmin Bahrami, The Swingle Singers, Sergej Krylov were also performing.

He is artistic director of the music festivals: “Più Piano” (with Monique Ciola), “I martedì a casa Raphael” (with Santo Albertini), “I concerti dell’Associazione Rosmini”, “Katharsis”, “GiudiJazz”. Having formulated the principles of the “aesthetics of catharsis” and the “technique of the pan-modality”, he is currently engaged in the compositional project “Ars Modi – The Art of the Mode”; a project offering new perspectives and a middle way in compositional style, somewhere between the two extremes that dominated the twentieth century: the “aesthetics of malaise – extreme atonality” on the one side, and the “aesthetics of naïvety – traditional tonality” on the other.