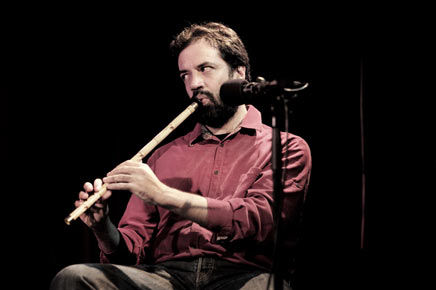 Harris was born in Athens in 1976 and started playing music since childhood. His father, painter Giorgos Lambrakis was his first music teacher.

He graduated from the Music High School of Pallyni, Attiki and from the Music Department of the Kapodistrian Athens University. He studied music theory next to Marios Mavroidis and Theodora Varsou, nay with Silvia Koutrouli and Ömer Erdoğdular, composition with Giannis Ioannidis and with Ioannis Arvanitis and Vasilis Barboutis byzantine music.

He teaches nay since 2000 in various conservatories in Athens (National Conservatory of Athens, Simon Karras Music School). He teaches in seminars in Greece and abroad.

He has participated in more than 150 music productions in the Greek and international record industry and has performed traditional, jazz, world, contemporary and improvisation music. He has taken part in the first international nay meeting in Istanbul (October 2003. He has also composed theater music. Besides nay, he also plays piano and the hammond organ. In 2006 he created Harris Lambrakis Quartet with which he has made already two albums (THEA, 2010 and METEORA, 2012).