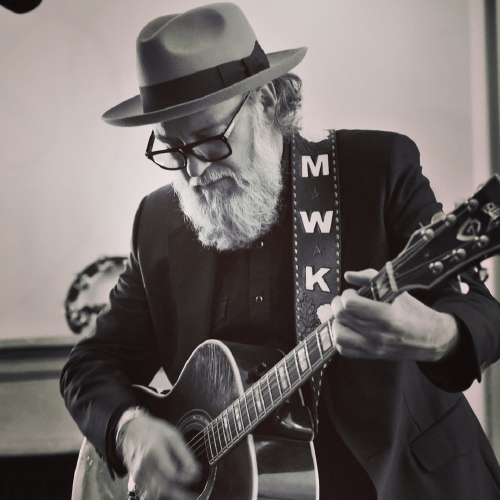 Michael Weston King is the former leader of 90’s U.K. Alt Country pioneers The Good Sons, with whom he made 4 ground-breaking and critically hailed albums.

From 1999 – 2010 he toured the world as a solo artist, performing and working with the likes of Nick Cave, John Cale, Roger McGuinn, Steve Earle, Guy Clark, Chris Hillman, Ron Sexsmith, Nils Lofgren, and many more. During this time, he released 6 studio albums, 3 live albums and a career retrospective DVD, The Crowning Story, in this phase of his career.

For the past ten years he has been half of the brilliant country soul duo My Darling Clementine with his wife Lou Dalgleish. They have released 5 much loved and much lauded albums, the latest being Country Darkness, a collaboration with Steve Nieve re-interpreting the songs of Elvis Costello.

In April 2022 he released The Struggle, his first solo album in ten years. It features co-writes and contribution from friends and musical fellow-travellers Peter Case, Jeb Loy Nichols, and Jackie Leven.

As a songwriter, over 60 different artists have recorded Michael’s songs including American folk music icon Carolyn Hester and his mentor, the late, great Townes Van Zandt.